Visionary Art Exchange was founded by Michael Acevedo in 2017 to showcase Artists from around the world and give people an opportunity to own a piece of their vision. Highlighting the rich history and culture behind Visionary and Psychedelic Art.

Michael moved to San Francisco from Miami in 1988. It was at this time that he attended his first concerts at the Fillmore where psychedelic rock art posters were at the center of the San Francisco music experience. Bay Area poster art of the 60’s quickly became a fascination of his and his collection began to grow for there forward. He began attending the Rock Poster Society’s annual gathering at the San Francisco Hall of Flowers where he got to meet many of the artists and see the original artwork. He began to meet other collectors and quickly found a niche in this genre of art. He began to collect rare and highly collectible vintage posters. Although this started as a hobby, it subsequently turned into a business venture, as his extensive knowledge attracted the interest of other collectors.

In the Spring of 1992, Michael was introduced to Alex Grey at an art gallery. The first painting he saw was “Collective Vision”, a vision Alex had of infinite oneness… “The many faces of Collective Vision united by the mandalic eye-field suggest both expansion of consciousness and sharing consciousness.”  Viewing this piece was a true turning point for Michael in his appreciation of paintings. Not only was the divine message clear to him, but the layers and depth that Alex was able to achieve with his brushwork really opened his mind to a whole new world of incredible art. He was then turned onto “The Sacred Mirrors”… “the Sacred Mirrors series of 21 paintings divides into three sections of body, mind, and spirit.

Michael was blown away by the ability for these paintings to open you to seeing the truth of your own nature. He was fascinated by Alex’s ability to take visions from his minds eye and translate these visions from the interdimensional realm of the psyche onto a canvas. He so deeply related to these paintings, they gave him a window into his own psyche and allowed him the space to contemplate his own personal visions. Never before had art made more sense than at that moment. These complex and mind opening masterpieces spoke directly to his soul.

He purchased “Firewalking” and it was there that his spiritual journey truly began. Fire walking is an image of a man walking over hot coals with his spiritual energy aglow and his chakras “connected with time, fate, and circumstance”. He later purchased “Transfiguration”, a depiction of a man transcending the physical world and his flesh into the metaphysical world where his body is immersed in rainbow light and universal consciousness. Having the opportunity to live with these incredible pieces was a very evolutionary experience for Michael. He would often sit with these paintings, feeling the power of their sacred messages and allowing that incredible force of beauty help shape who he was as a human being. His life had been changed for the better through these paintings. He felt an overwhelming passion to want to share this art with everyone he could. This is where the seed was planted.

Over the course of the next 2 decades, Visionary Art would serve as important reminders of truth. These profoundly deep images allowed him the sacred space to do important inner work. As human beings, we all navigate places of both light and darkness. To be able to contemplate the journey of humanness as a whole being: mind, body, and spirit, allows for a deeper to connection to yourself and to all that is.

This ability for art to possess such a deeply healing and transformative experience inspired Michael to create Visionary Art Exchange where people can acquire high quality reproductions of these incredible masterpieces so that they too can feel the magic of these paintings. Because Michael is such a deep appreciator of every brush stoke, it was his desire to work with the most cutting edge technology in printing to bring through the best possible product so that the integrity and detail of these paintings lives on. As a collector, he wanted to ensure that these runs were small and that they not only retained their value, but grew…thus each print is signed and numbered by the artist with certificates of authenticity accompanying them. Michael believes that Visionary Artists are leaving an important legacy that is a true gift to humankind…a portal into the divine, that in turn allows us to see the divinity within ourselves. Seeing this truth and magic within allows us to open and to heal. This is where the work is done. After all, when you can heal yourself, that is the first step in healing the world. 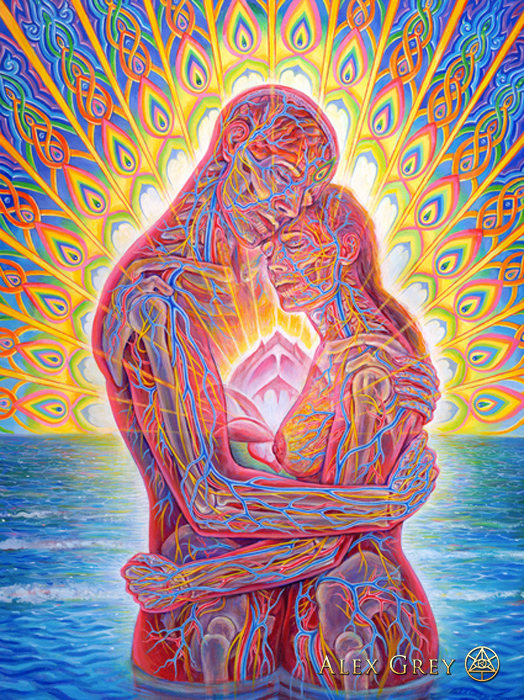